Can you imagine keeping your lawn clean and tidy without a lawn mower? It would definitely be a challenge.

The modern lawn mower saves an exponential amount of time and labor by making the process more accessible and enjoyable for the everyday person. Today, the idea of maintaining a lawn without a lawn mower seems somewhat impossible.

After grooming your lawn, you may be eager to learn about the wise man who came up with such a novel idea and how he invented the lawn mower?

Well, to feed your curiosity, let’s jump in!

Who Invented The Lawn Mower: The Ultimate Dreamer

When you search for the inventor of the lawn mower, you may find different names attributed to its creation, but don’t be confused by the speculations of the internet.

Here, we will provide clarity to all the misinformation!

Was the Lawn Mower invented by an American Person of Color?

If you are thinking about an improved lawn mower with traction wheels and rotary blades, then the answer is yes. It was created by an American man named John Albert Burr, who was a person of color. He came up with this modernized idea to make the original lawn mower faster and more efficient.

However, as you may have already guessed, considering the limited technology back then, the first lawn mower was much more simple.

So, who invented the first lawn mower? And, how was it created?

The Story of lawn mower invention

As history demonstrates, the first lawn mower was invented in Great Britain in 1830, by an engineer from a local cloth mill named Edwin Beard Budding. He got the idea during his regular shift at the cloth mill.

Inspiration of the invention

Edwin Beard Budding is said to have been inspired by a cloth trimming tool in his factory. This particular machine was used to make the surface of velvet and wool cloth smoother by cutting the extra irregular nap, which are the remaining threads on clothes. The machine had a cutting cylinder and a reel that was bladed.

Budding considered using the same method to cut the grass of the lawn, so he developed the first model of lawn mower using this idea.

This first version had a cylinder which was surrounded by several blades and was around nineteen inches wide.

There are rumors that Budding was testing his invention in the middle of the night to escape any social criticism or ridicule.

Because the technology was so new for that time, the function of this first machine was difficult to execute.

Ferrabe and Budding came to an agreement where Ferrabe and his company agreed to pay the development costs, and in return, his company retained the rights to manufacture and sell the product.

They also founded other companies to help develop and sell this product; among them, the company JR & A Ransome of Ipswich was most popular.

To his credit, Budding made the wise move of registering his patent as soon as he was sure about the product’s workability.

He registered a British patent on August 31st, 1830, under the title “application of machinery for the purpose of cropping or shearing the surfaces of lawns”.

In the initial stages, the machine was only usable for a large lawn or in the sports field. Later, it became a staple household item for the upper class.

It took 10 more years to develop a large-scale mower that could be pulled by animals; 20 years later, a steam powered lawn mower was introduced.

The lawn mower has grown and developed through many different phases, and even different countries, to get to where it is now.

In 1868, an American manufacturer named Amariah Hills invented a reel, spiral bladed lawn mower, meaning the blades spin vertically using a scissoring motion and registered their patent. Then in 1870 a human pushed lawn mower was introduced. The first model of lawn mower wasn’t able to be pushed by humans because of its weight and structure.

In 1899, John Albert Burr, an American person of color, introduced a more advanced version of the lawn mower. It had rotary blades and traction wheels and was capable of mowing near the edges of the building walls. Prior to this design being introduced, lawn mowers greatly struggled with grass clippings getting caught in the motor easily, so it was specifically designed to resolve this issue.

In 1983, Toro, which was also an American company, introduced a motor-powered lawn mower. It was exceptionally easy to handle, affordable and could fit in a medium sized garage. This revolutionized American households.

In 2005, after many adaptations and decades of development, a robotic lawn mower was introduced, which was autonomous and completely free of the need for human operation. In 2012, with the emergence of smartphones, smartphone-controlled lawn mowers were developed. Their motors were designed to be silent and produced no sound while mowing.

At present, around 54 million Americans mow their lawn each week. They spend around 70 hours per year mowing, which requires around 800 million gallons of gas.

With their introduction to society in Britain, to then traveling across the Atlantic to America, lawn mowers have continued to save our time, energy, and improve the aesthetic of our lawns for more than 190 years. We hope this article on ‘who invented the lawn mower’ has been enlightening and informative.

Don’t forget to thank those great men the next time you mow your lawn! How To Start A Lawn Mower With A Bad Starter? (Step-By-Step Guide)
4 minutes By Todd L Miles 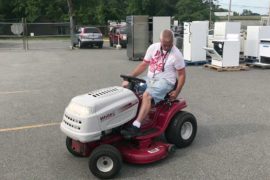